I was hurt in Afghanistan on my second deployment while serving as a helicopter door gunner in the United States Marine Corps. My injuries included a left leg above knee amputation, a traumatic brain injury, and spinal cord damage (amongst a laundry list of others), which later resulted in a medical retirement after six years of service.

I was robbed. Or at least I felt like I was. I joined at 17 and all I wanted to do was serve people and protect those who couldn’t protect themselves. As I left the military in 2014, I feared for what I would do with the rest of my life. I was stripped of my purpose and was now left to find a new one. To cope with my injuries and sense of loss, I turned to the outdoors. Considering I am from Florida, I was in awe of the snow and mountains as I was introduced to adaptive snowboarding.

I started competing alongside Team USA as I fought for a spot on the Paralympic team. Over time, medals weren’t enough. I didn’t want to be good at boardercross, I wanted to be a good snowboarder and efficient in the backcountry. So, I took to the mountains in other ways, by rock climbing and ice climbing – then my curiosity for altitude followed suit. Mountaineering quickly became an obsession, just as much as a therapy. I made the goal to complete the Seven Summits – the highest peak on each of the seven continents.

I never wanted it to be a display of me beating on my chest and saying, “Look at what I can do.” I wanted this goal, this project to have purpose, heart, and passion. So I decided I would raise money and awareness for different nonprofits behind each climb. I started with Kilimanjaro in March of 2017 in support of the Waterboys, followed by Carstenzs in July of 2017 in conjunction with the Heroes Project. I attempted Denali in June of 2018 to support Building Homes for Heroes. I summited Elbrus in September 2018 for Glam4Good and Aconcagua in February 2019 for Merging Vets and Players.

In the summer of 2018, myself and three board members created The Kirstie Ennis Foundation. We are a 100% volunteer based organization with a mission to financially support deserving nonprofits and provide education, opportunity, and healing in the outdoors. Which leads me to sitting in the small village of Dingboche on my attempt to summit the highest mountain in Asia, the tallest in the world, and better known as Everest. I am seeking to write history as the first woman above knee amputee to summit Everest as a means to raise awareness for The Kirstie Ennis Foundation, inspire others to use more of their potential, push for advancements and accessibility of prosthetics, and promote the education of healing in the outdoors. Possibilities are endless, given you are willing to work for them.

I am parked on a bench of a lodge in Dingboche, in route to Everest Base Camp for my summit attempt. The crisp air bites the tips of my fingers and the end of my leg. I didn’t wear my prosthetic this morning to give what’s left of my left leg a rest. The looks of locals scream confusion. Typically its because of my “robotic” blue knee, but this time it’s clearly my lack of symmetry and the bizarre sticks I am using to crutch around.

If you would have asked me in March of 2017 when I sought out to climb Kilimanjaro to raise money for clean water via the Waterboys, I would have never dreamt that I would be attempting to be the first woman above knee amputee to summit Everest two years later. I also wouldn’t have thought that I would be climbing to raise awareness and fundraise for my own nonprofit, the Kirstie Ennis Foundation nor that I would be more than halfway finished with the Seven Summits.

Originally, the mountains were simply a scapegoat; a way for me to get away from Naval Medical Center San Diego. It later was a vessel into competitive snowboarding, then ice and rock climbing, and finally mountaineering. I’ve called my endeavors “recreational therapy” for quite some time, but as I sit here and reflect on my experiences, it’s actually quite miserable. Being in the mountains as an amputee is purely about knowing how to suffer well and having the ability to convince yourself to put one foot in front of the other. Every mountain, I find myself chewing my way up and leaving behind my tears of frustration and those of comparing my body and speed to how it once was. Every climb, pain surges my body and I find myself envying those around me, of their apparent lack of effort in accomplishing the same things I am. Every step, I am reminded of my independence and resiliency — and of how hard I fought to stay out of a wheelchair and away from the four walls of my hospital room. And that’s why I am right back here in the mountains; that’s why I continue to climb.

My mantra I keep on repeat to get through my dark days is, “its the six inches between my ears and what’s behind my rib cage that dictates what I am capable of.” Which directly correlates to the mountains; we can overcome anything physically, given you keep your head and heart in the right place.

When I am running on fumes, and beating myself up internally, I remind myself that I didn’t have the role model I needed while I was overcoming my adversities and injuries. I especially didn’t have a female one. I am not a mother, nor am I sure that I would ever want to be, but I want to inspire our next generations. To show our youth it is okay to be different; to own what makes you different. To motivate others to find their passion and the thing that makes you want to jump out of bed every day. To dream, even when no one else around you believes.

I remind myself that there is always someone watching. Even if I only make a difference in one persons life, this is all worth it. I went from serving people and protecting those who can’t protect themselves to truly living my life for others. I could be upset about everything I’ve lost due to my injuries in Afghanistan – a leg, my memory, my career, and years of my life to recovery. But instead, I focus on what I’ve gained. The people and experiences have all been worth it.

Here’s to writing history and challenging others to do the same. Here’s to hopefully standing on top of the world, on one leg. 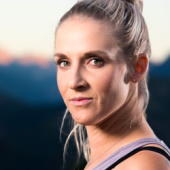 An Eye on the Clouds | By Forrest Boughner